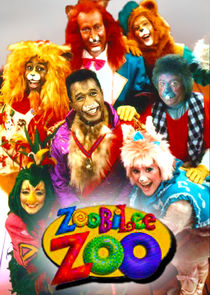 Zoobilee Zoo is a children's television series featuring costumed performers dressed as animal characters. It originally aired from 22 September 1986 to 27 March 1987, then in syndication until 2001 on several television channels including commercial network television stations, public television stations, The Learning Channel, and the Hallmark Channel. The original 65 episodesare currently owned by Hallmark Properties and were produced by WQED Pittsburgh.

Generally the plot of each episode consists of the main characters, called Zoobles, encountering difficulties usually common to young children and then learning a moral lesson about dealing with such problems, such as being apprehensive of going to a doctor or learning to appreciate others. Mayor Ben, who usually appears at the beginnings and ends of each episode, calls the fans and viewers of the show Zoobaroos.Episodes were released on a wide array of VHS videocassettes, the most recent series released in 1997, but not yet released to DVD. In 2000, 14 new direct-to-video episodes and soundtracks were released, and the stage show "Zoobilee Zoo Live!" toured briefly, with several of the cast members reprising their roles.