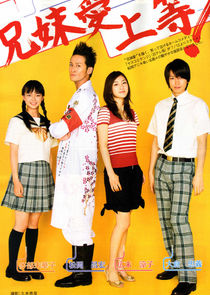 The show focuses on a man named Kenji and his younger sister Yasuko, whose parents died in an accident 10 years earlier. Kenji was once the leader of a gang, but in order to support him and his sister, he began making a living as a shojo mangaka. His character normally wears glasses and appears to be a gentle guy, but he throws off his glasses and reverts to his violent side whenever he tries to protect Yasuko from danger. Part of the story follows Yasuko's romance with an intelligent and good-looking man named Jun Tsubaki. Jun's older sister Erika now runs a flower shop, but Erika was once a leader of a female gang, and she used to be in love with Kenji during those days.

1x9: A Sad Conclusion... Save Your Younger Sister's First Love!!

1x8: For You, Brother! A Teary-Eyed Manga Illustrator Comeback Strategy!

1x7: They Know His True Identity!? The Cosplay Double Strategy

1x6: The Pure Love Between Two Ex-Yankees is Lost

1x4: A Teary-Eyed Birthday Present for My Little Sister

1x2: The Confession of a Pure-Hearted Female Biker Gang Boss!