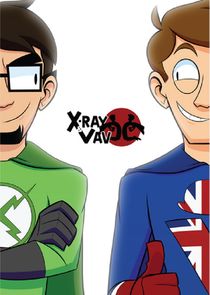 X-Ray and Vav is an animated series by Rooster Teeth. The series revolves around the heroes X-Ray and Vav, based on the team formed by Ray Narvaez, Jr. and Gavin Free, and is directed by Jordan Cwierz and Lindsay Jones, with Patrick Rodriguez as the art director. X-Ray and Vav want to be the greatest super heroes ever, but they're the last people you'd want to be saved by. Despite their lack of superhero prowess, the duo is ready to take on any thug, robber or villain who stands in the way of justice. And they'll do it in true X-Ray and Vav fashion; crotch touching and creating chaos to save the day (for the most part)!

2x5: The Madness of the King