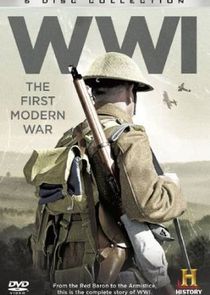 This miniseries focuses on the game-changing weapons that were introduced during World War One - the war that was supposed to end all wars. Troops who were bunkered down in vast trenches became overwhelmed by powerful new weapons, including tanks, WMDs, submarines and the first blitz. Through experts, eyewitness testimony, riveting archive and special recreations seamlessly blended into an archival background, each hour-long episode features the story of one of these weapons. The mini-series examines how and why the weapons were developed, the strategy of how they attempted to break the bloody trench warfare stalemate, and their ultimate effectiveness. At the end of four years of war, a generation of men was lost.

The Atlantic became a killing field as German submarines took on the might of the dominant British Navy. The stealth and silent killers were able to sink 5,200 ships by war's end, and nearly brought Britain to its knees. But in their frenzy of attacks, the Germans sink the US passenger liner Lusitania, killing nearly 2,000 on board. American outrage helped President Wilson get Congress to finally agree to enter the war. In the end, the Allied Atlantic blockade forces Germany to surrender, but the submarine was established as an effective military weapon.