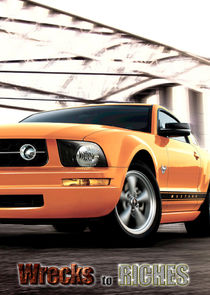 Barry White knows how to build custom cars. But what are they worth? He's about to find out. Each episode, Barry White's Speed Shop, with its unlikely team of mechanics, hangers-on and family members, have just four weeks to find a dilapidated classic car and turn it into money. Using original equipment reproduction parts, Barry will rebuild these icons to sell under the hammer at America's most prestigious auto auctions. Each episode we follow Barry and his team building one classic car, taking it to auction, then going home broke or happy. Throughout the series Barry works with a core cast of characters, as well as new team members called in to make the most of his chances at auction. After frantic weeks of building, Barry and the team have to spend nervous hours watching potential bidders scrutinize every square inch of the car before it crosses the auction block… then the nail-biting climax. For Barry it's personal. It's HIS money and reputation on the block. Barry judges each restoration a success only if he can make his money back with interest. From a $4,000 wreck, Barry's looking to bring home $30,000 - $50,000. If it's a Barry White special ‘one-off' reproduction, there could be some serious profit, over $100,000.