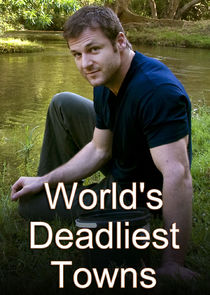 In World's Deadliest Towns, zoologist and predator expert Dave Salmoni is on the front line of a war between humans and elephants. No stranger to danger, he joins forces with an armed elephant squad and helps defend the villages of North East India from rampaging elephants in the dead of night. In the past 10 years hundreds of men, women and children in this region have been trampled to death by the planet's largest land mammal and the situation has just reached crisis point. It is one of the most hostile wildlife warzones and Dave is on a quest to discover what has made these beasts become so dangerous.