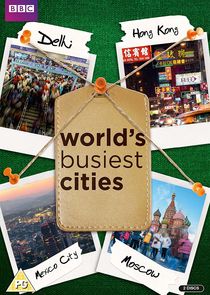 Dan Snow, Anita Rani and Ade Adepitan reveal the hidden systems and armies of people running some of the greatest cities on earth.

This time, they are in Delhi, capital of India, with a population of 26 million and rising. Anita discovers how this growing city feeds itself, visiting Asia's largest fruit and veg market, a round-the-clock operation spanning an area the size of 80 football pitches turning over a billion pounds a year.

Dan explores how the city has grown from its origins at the heart of the great Mughal Empire, through jewel in the crown of the British Raj to capital of the world's largest democracy, while Ade braves the seething backstreets to get a taste of life as a porter in one of India's oldest markets. It is hectic, it is noisy and it is hot. How on earth does this city of 26 million people live, thrive and survive?