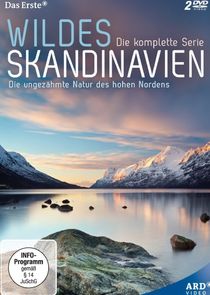 With stunning images presented the six -part documentary series Wild Scandinavia the harsh , untamed nature of the far north . Rugged coastlines and fjords , glaciers, volcanoes and jungles are still the habitat of rare plants and animals . Of the brown bears in Finland to Sweden's elk , of Iceland's arctic foxes in Norway's musk oxen , polar bears from Greenland to the red deer in Denmark - each film takes the viewer into the wilderness of northern Europe