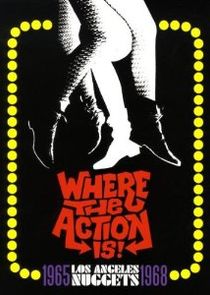 Where the Action Is or (WTAI) was a music-based television variety show in the United States from 1965–67. It was carried by the ABC network and aired each weekday afternoon. Created by Dick Clark as a spin-off of American Bandstand, Where the Action Is premiered on June 27, 1965.

Originally intended as a summer replacement and broadcast at 2 P.M. EDT, the show was successful enough for it to continue throughout the 1965-66 TV season, with a change in time period to 4:30 P.M. Eastern time following the horror soap opera Dark Shadows. Both programs attracted a young audience who watch the shows after school.

The show's theme song, "Action", became a hit single for Freddy "Boom Boom" Cannon, peaking on the charts (#13) in September 1965. Most of the telecasts, all of which were produced in black-and-white, were taped at various locales inSouthern California although a handful of segments were taped elsewhere in the country. The theme song was written by Steve Venet and Tommy Boyce. Later Boyce co-wrote songs for The Monkees.

The program had its own stable of performers, most notably Paul Revere & the Raiders, who served as the de factohouse band. When the group departed the show in 1966, they were replaced by The Robbs. Other regular performers on Action included the dance troupe Pete Manifee and the Action Kids. Individual episodes featured a wide range of guest performers, as detailed below.

Also appearing were Steve Alaimo, Keith Allison, and Linda Scott. Ms. Scott had a few hit singles as a teenager in the early 1960s; she was only 20 when "Action" premiered.

The weekday program was cancelled on March 31, 1967, with the network giving its local affiliates the time slot. However, members of the program's mainstay band Paul Revere and the Raiders (with lead vocalist Mark Lindsay) hosted very similar follow-up shows; both Revere and Lindsay hosted Happening '68, a Saturday afternoon follow-up toAmerican Bandstand, and a weekday version of the same show, It's Happening, from 1968 to 1969. Both shows were produced by Dick Clark's production company for ABC.

2x197: Gary Lewis and the Playboys