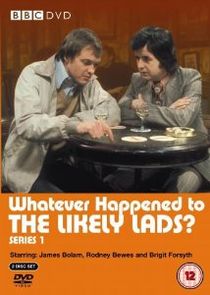 "Whatever Happened to the Likely Lads?" is a British sitcom which was broadcast between 9 January 1973 and 9 April 1974 on BBC1. It was the colour sequel to the mid-1960s hit The Likely Lad

There were 26 episodes over two series; and a subsequent 45-minute Christmas special was aired on 24 December 1974.

Since the ending of the original series, in 1966, Bob has left factory life behind for an office job, in his future father-in-law's building firm (something which makes Bob even more desperate to curry favour with Thelma and her family). But what Bob does for a living is not a major part of the show; more important is the simple fact that he is now a white-collar worker, and (at Thelma's urging) is joining badminton clubs, attending dinner parties, and – in all sorts of ways – appearing to Terry as aspiring to join the middle class. Terry sees Bob as a class traitor, and looks upon his own Army experience and solid working class ethos as giving him moral superiority.

To a considerable degree, in fact, the comedy is built upon a basis of class warfare – a theme which was very familiar to British television audiences in the 1970s, a period of virtually continuous industrial strife in Britain. Terry is being left behind, a relic of the attitudes of the mid-1960s, due to his five-year absence in the Army; whereas Bob, Thelma, and Terry's sister Audrey – i.e. all the other main players in the show – have moved on, and are all to various degrees embracing more affluent, middle-class lifestyles. Terry is alone in clinging to his old beer-and-skittles Andy Capp lifestyle, as the others frequently tell him; and the tensions which this causes, between him and Bob, him and Thelma, and him and Audrey, are a main engine driving the comedy.

Terry finds it particularly hard to adjust to all the changes which have occurred in the five years he's been away. As implied in the lyrics to the programme's theme song, the 1970s series plays on both lads' feelings of nostalgia for the lost days of their reckless youth. Both of them are depressed by the demolition of so many of the landmarks of their youth, though Bob, who works for a building firm, sometimes sees it as progress. Bob has also bought his own house, on a newly built estate – something else which sets him apart from his old friend.

Reflecting the distinctions now separating the two young men, the opening credits show Terry amongst the older and more industrial buildings of the city, with Bob seen in modern, more attractive surroundings.

Terry and Bob from The Likely Lads (1964) continue their life after Terry arrives home from serving in the Army to discover that Bob is about to marry his girlfriend Thelma. Can Thelma lead...

2x6: Some Day We'll Laugh About This