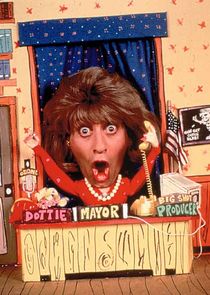 Weinerville is an American television program on Nickelodeon that was produced in 1993-1994. The show was based around a giant puppet stage which was designed to look like a city, called Weinerville. The show was hosted by Marc Weiner.

The show premiered on July 11, 1993. During the first season, all episodes ran in a two-hour marathon every Sunday. However, Weinerville quickly gained popularity: in the middle of the first season Nickelodeon began running the show on weekday afternoons. An addition to Weinerville's popularity Nickelodeon allowed Marc and his characters to host a New Years special event, a kid version of Dick Clark's New Year's Rockin' Eve "Nick New Years" which was intentionally host segments wrap around for the best Nicktoons and shows of that year, and read letters from kids about their New Year's resolutions as they count down to midnight, and celebrated by shooting slime into the sky. Marc and his Weinerville characters hosted "Nick New Years" in 1993 and 1994 from Times square in the Nickelodeon Party Penthouse. For the second season, which premiered on May 2, 1994, the episodes aired daily and in the summer was a part of the Stick Stickly show Nick in the Afternoon, which included Marc as Dottie in some segments. Unfortunately with all the success of hosting two seasons, promotions, three television specials, and hosting a four-hour new year's special for two years, Weinerville was not renewed for a third season. According to Marc, the cancellation of Weinerville happened was because Nickelodeon was changing their identity from family friendly to edgy, sarcastic, and some what subversive shows, and a puppetshow to Nickelodeon, did not fit in the networks' new direction of programming.

A mostly one man show in which a guy (Marc Weiner) interacted with his puppet selves (his head on the body of puppets) to solve their silly problems in a cardboard town. Included games with audience participation.