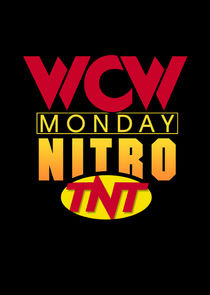 WCW Monday Nitro was a weekly professional wrestling telecast produced by World Championship Wrestling, created by Ted Turner and Eric Bischoff. The show aired Monday nights on TNT, going head-to-head with the World Wrestling Federation's (WWF) Monday Night Raw from September 4, 1995 to March 26, 2001. Production ceased shortly after WCW was purchased by the WWF. The debut of Nitro began the Monday Night Wars, a ratings battle between the WWF and WCW that lasted for almost six years and saw each company resort to cutthroat tactics to try to compete with the competition. In mid-1996, Nitro began to draw better ratings than Raw based on the strength of the nWo storyline, a rebellious wrestling stable that wanted to take over WCW. Nitro continued to beat Raw for 84 consecutive weeks, forcing WWE owner Vince McMahon to change the way he did business. As the nWo storyline grew stagnant, fan interest in the storyline waned, and Raw began to edge out Nitro in the ratings.

The turning point for the organizations came during mid April 1998 after Steve Austin won his first WWF title. From that week forward, Raw beat Nitro in the ratings by a significant amount, and WCW was never able to regain the success it once had. Besides broadcasting from various arenas and locations across the country (such as the Mall of America in suburban Minneapolis, Minnesota, from which the very first episode of Nitro was broadcast), Nitro also did special broadcasts from the Disney-MGM Studios in Orlando in 1996, and did annual Spring Break-Out episodes from Panama City Beach, Florida starting in March 1997. The rights to WCW Monday Nitro now belong to WWE.

The Night of Champions

Final episode of Nitro. WCW is purchased by the WWF. The matches that aired on this final 3-Hour long WCW card were as follows:

In an attempt to save WCW and Nitro, Bischoff attempted to purchase the company with a group of investors. However, although Bischoff's offer had been accepted, recently appointed Turner Broadcasting executive Jamie Kellner announced shortly after his arrival that Nitro and all WCW programming was immediately canceled on both TNT and TBS. Bischoff's group then withdrew their deal, as it was contingent on keeping WCW programming on some outlet. Instead, WCW's trademarks and certain assets (such as its video library and the contracts of 24 wrestlers), though not the company itself (which still exists as a Time Warner-owned legal entity under the name Universal Wrestling Corporation[8][9]), were bought by Vince McMahon- the owner of the WWF (now WWE), its long-time competitor.

Around the time of the cancellation, WCW was preparing to make its yearly trip to Panama City, Florida for Spring break. Since the premiere of Nitro, WCW had gone to either the Boardwalk Beach Resort or Club La Vela every March to try to gain favor with adolescent and young adult viewers who might not otherwise be tuning into the program. It was announced that the upcoming March 26, 2001 episode of Nitro from Panama City was to be the finale and the show was dubbed "The Night of Champions." The show began with McMahon appearing via satellite from Gund Arena in Cleveland, Ohio, the site of that Monday's RAW is WAR broadcast on TNN. McMahon announced his purchase of WCW to the crowd and appeared in vignettes throughout the show, including one where he terminated WCW's Jeff Jarrett on air due to bad blood the two had in the past.

The show was unique in that all of WCW's major championships were defended that night and in almost all of the matches on the show, the faces won (traditionally WCW was seen as the promotion where heels were often the top stars as opposed to the WWF, where faces were often the top stars. Shawn Stasiak was the only heel to emerge victorious on the final episode of Nitro). In addition, various WCW wrestlers were interviewed giving their honest, out-of-character responses to the selling of WCW. The co-main event of the evening was WCW World Heavyweight Champion Scott Steiner taking on WCW United States Heavyweight Champion Booker T in a match with both belts on the line; Booker defeated Steiner for his fourth WCW World Championship while retaining the U.S. Championship.

Just as it had been on the initial Nitro, the final match of the final Nitro was between long-time WCW rivals Ric Flair and Sting, a match that was more informal than their usual encounters (Sting and Flair were seen smiling and nodding respectfully towards each other throughout the match). Sting won using his finishing move, the Scorpion Deathlock. After the match, the two competitors stood in the middle of the ring and embraced to show respect for one another.

The show ended with a simulcast on Raw on TNN with an appearance by Vince's son Shane McMahon on Nitro. Shane would interrupt his father's gloating over the WCW purchase to explain that Shane was the one who actually owned WCW (this was just part of the storyline, as the WWF as a whole was the true owner of what assets it acquired from WCW), as part of the set up of their match at WrestleMania X-Seven and of what would later become WWF's "Invasion" storyline. In addition to the tape library and other intellectual properties, WWF also purchased several contracts of WCW talent, keeping many of the younger stars. Four of WCW's championships found their way into the WWF; in addition to Booker T carrying both the WCW Championship (as it was renamed) and United States Championship with him into the WWF, McMahon also signed then-WCW Cruiserweight Champion Shane Helms and then-WCW Tag Team Champions Chuck Palumbo and Sean O'Haire to contracts. (The WWF scrapped the WCW Hardcore Championship, as it was officially retired immediately following the final Nitro despite no one holding it since Meng departed for the WWF in early 2001, and the WCW Cruiserweight Tag Team Championship for undisclosed reasons; although no official reason was given, Billy Kidman and Rey Mysterio, Jr. were the last champions and McMahon was only able to sign Kidman to a contract at the time.)

7x12: The Night of Champions


Paul Wight as The Giant