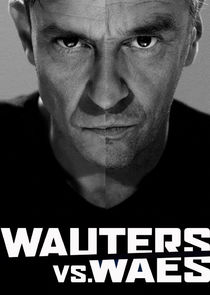 Wauters vs. Waes is a joint Flemish television program VTM and One, shown since January 13, 2014 at both stations is. The first five episodes were broadcasted by one with a repeat on the same night by VTM. During the last five episodes, the roles were reversed. It is the first entertainment program that since the establishment of the commercial station will be realized in 1989 in cooperation with the public channel. Koen Wauters, a VTM celebrity, and Tom Waes, a the faces of one, go ten challenges to decide who is the most impressive now. Als coaches, jury en supporters treden onder andere Cath Luyten en Cathérine Moerkerke op. As coaches, judges and supporters join include Cath Luyten and Catherine Moerkerke on. The program is co-produced by the independent production deMENSEN and internal VTM-production Operation Cuckoo. In March 2015, the program won at the World Media Festival prize in the category 'Other Entertainment'. On April 18, 2015, the program won the Gala of the Flemish Television Stars 2015 Star for Best Entertainment Programme.

Koen Wauters and Tom Waes compete with each other to see who is the best of them both.