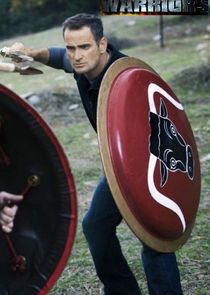 What does it take to be a warrior? Travel the globe alongside Green Beret Terry Schappert, in an action-packed journey as he experiences the training, rituals and weapons of history's most iconic warrior cultures. Terry probes deeply into the spirit of an ancient warrior - from Vikings, Samurai, Barbarians and Knights - revealing a side of these fighters that is seldom seen and rarely understood. Because Terry is a Special Forces soldier, he genuinely relates to warriors of the past, helping viewers understand what made them fight and die for causes greater than themselves. Throwing the battle ax of a Viking, firing the ballista of a Roman legion, experiencing the time honored rites of the Samurai and the chivalric traditions of the English Knight - Terry fully immerses himself into each warrior culture. Learning first hand the ingenious technology of their ancient weapons and bringing dramatic history to life. Warriors takes viewers to the very lands on which these ancient forces fought - from the jungles of Central America to the savannahs of South Africa.