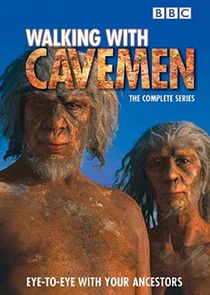 Walking with Cavemen is a four-part television documentary series about human evolutionproduced by the BBC in the United Kingdom.

Like previous Walking with... documentaries, Walking with Cavemen is produced in the style of a nature documentary, featuring a voice-over narrator (Robert Winston in the British release, Alec Baldwin in the North American release) who describes the recreations of the prehistoric past as if they were real.

The great follow-up to 'Walking with Dinosaurs' and 'Walking with Beasts', presented by Professor Robert Winston, explains the story of human evolution.

The fourth episode first shows Homo heidelbergensis in Britain. H. heidelbergensis is depicted as intelligent and sensitive but lacking in the ability to comprehend an afterlife, or anything that isn't in the "here and now".

Next, the episode shows a clan of Homo neanderthalensis, how they lived and hunted, including the mighty mammoth during the last ice age. Finally in Africa then we see Homo sapiens idaltu which are not adapting well in Africa's drought unlike the Neanderthals in the north, along with them we see modern Homo sapiens (represented by bushmen), who had to become imaginative and inventive to survive the long drought unlike their subspecies idaltu, and finally glimpse the cave painters of Europe, who had "evolved" the idea of the afterlife and the supernatural, and now ready to start the human history as it is now known (and drive the Neanderthals to extinction).