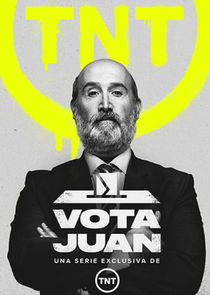 Vota Juan revolves around the character of Juan Carrasco, an uninspiring Minister of Agriculture who, after finding his political ambitions awoken by a series of chance political events, decides to take part in his party's primary elections thereby giving himself a chance to eventually run for the position of President of the Government. Party intrigues, jealousy, crises... as he undertakes this none too easy task he will count on the invaluable help of his press chief, his secretary and his personal advisor. His campaign team, much like him, try to make up for their lack of experience and political expertise through a mixture of guile and a whole host of other shenanigans. Will Juan Carrasco manage to make it all the way to the top?