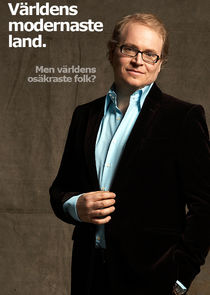 Världens modernaste land (‘The most modern country in the world') is a reflection on what it means to be a Swede. The series chosens to burrow into the deepest crevice of them all: the Swedish psyche. Over seven episodes the timeless riddle that is Sweden will be broken down into its constituent parts and slowly unravelled.

The programme considers the theory that the Swedish mentality is premised on two opposites: complacency and insecurity. Swedes tend to trust in the notion that Sweden is one of the best and most modern countries in the world. But these same people also view themselves as tepid and boring when viewed in an international perspective.