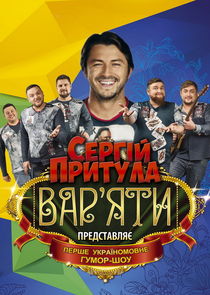 "Вар'яти" on Novyi channel is a TV version of the first Ukrainian-language humor show. This is what Serhii Prytula calls his brainchild. Today, this is the only project whose participants have been joking only in Ukrainian, and at the same time, for nine years now they have been successfully touring not only throughout Ukraine, but also abroad – in Europe, the United States and Canada.

There are six participants in the project. In addition to the host and entertainer Serhii Prytula, the audience is amused and charged with positive emotions by Volodymyr Zhohlo, Volodymyr Kovtsun, Vitalii Tylnyi, Serhii Polupan, Valentyn Serhiichuk. In their arsenal are humorous scenes, monologues, songs and everything that can make the audience laugh healthy that goes into Homeric laughter. What they do not have in their arsenal are pee jokes, profanity and humor on political topics.