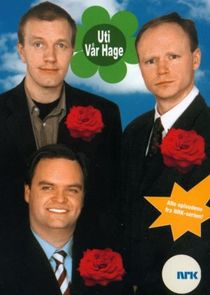 Uti Vår Hage was a Norwegian sketch comedy television program which had two different runs on TV in 2003 and 2008 on the Norwegian state channel NRK. The show starred the three well-known comedians: Atle Antonsen, Harald Eia and Bård Tufte Johansen. The format of the show was one main storyline that would gradually branch off into several separate minor storylines.