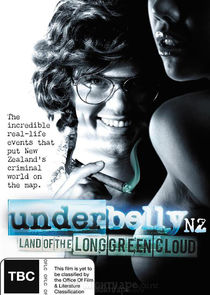 Underbelly NZ: Land of the Long Green Cloud is the New Zealand story of the real Mr Asia, Marty Johnstone, and New Zealand's first ever drug cartel, The Syndicate. The story of how a boy from Auckland's North Shore became an international playboy with an industrial scale global drug empire. A true event in New Zealand's history that is almost Shakespearean in its charting of the rise and fall of this extraordinary character, who due to a penchant for his own product, and a misplaced trust in his friends, ultimately became the architect of his own demise.

Set in the 1970s when New Zealand's most notorious criminals and young entrepreneurs got together to grow a small-scale Kiwi operation that soon gained momentum, eventually spawning a cartel that spanned the globe. This is essentially a coming of age story, where sex, drugs and rock'n'roll held New Zealand in its thrall, where big dreams became a glittering reality and living in the fast lane was de rigour.

Based on true events, Underbelly NZ: Land of the Long Green Cloud is a six part drama series that covers the incredible events that put New Zealand's criminal world on the map, events that still resonate to this day.

Thirty of Silver/One of Gold

1x6: Thirty of Silver/One of Gold