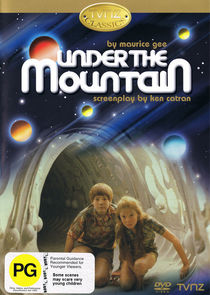 Under the Mountain was an eight-part television series based on the novel of the same name written by Maurice Gee and produced by Television New Zealand and first transmitted in 1981. Many of the minor roles in this series were played by people who were at the time well known performers in New Zealand.

The Gift of Oblivion

1x8: The Gift of Oblivion

1x5: Weapons of the Mind

1x4: The Alien World Below

1x2: Volcano of the Bleeding Skies