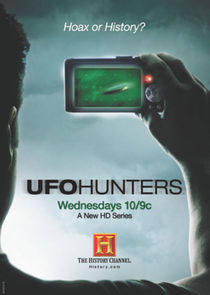 The new HD series is a spin-off from the network's hit program UFO Hunters which premiered in 2005. UFO Hunters airs new episodes every Wednesday at 10PM/9C on The History Channel®. The team's access to UFO evidence is unparalleled and their expertise allows them to quickly identify bogus claims of UFOs. Together, they use eyewitness accounts, scientific experimentation, documents recently released through the Freedom of Information Act and footage that has never been seen before on television to piece together compelling — and at times chilling — evidence of UFO phenomena. Join UFO Hunters Bill Birnes, Pat Uskert, Dr. Ted Acworth, and Jeff Tomlinson as they separate fact from fallacy.