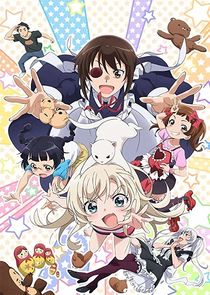 Having lost her mother at a young age, Misha Takanashi, a second grader with Russian blood, now lives with her Japanese father. Tsubame Kamoi, formerly a Self-Defense Force officer, comes to the Takanashi household as a housekeeper. This is a home comedy where Kamoi, a hardcore lolicon, attempts to get near Misha as she tries to fight against her.

Takanashi Misha is a second grade elementary school girl whose father is Japanese and mother was Russian. After she lost her mother at an early age, she has lived alone with her father. One...

My Maid Now and Forever

As Misha remains shut up inside her mother's room, Yasuhiro explains how the studio is important to Misha as she allegedly believes her mother may still return. Recalling her own father's death, Tsubame tells Misha that her mother isn't there, leading her to calm down and apologise to her friends. After speaking with Misha, Midori confronts Tsubame as she attempts to leave, reminding her of how much she cares for Misha. Tsubame tells Misha about how her father's death led to her joining the JASDF under the belief that he was waiting in the sky. Misha then explains that she was angry of herself for seemingly forgetting about her mother, to which Tsubame assures Misha that she is making better progress than herself, who clung onto the JASDF until she was forced to quit due to losing sight in her right eye. Warmed by Tsubame's words, Misha invites her into the room to help her clean it.

1x11: My Maid And The Forbidden Room

1x8: My Former Maid Is From A Good Family

1x5: My Maid Is Everywhere