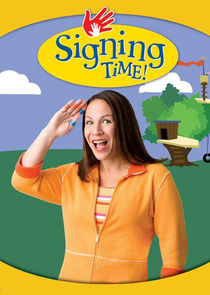 Signing Time! is a television program targeted towards children aged one through eight that teaches American Sign Language. It is filmed in the United States and was created by sisters Emilie Brown and Rachel Coleman, the latter of whom hosts the series. Between the years 2006 and 2008, it was aired by American Public Television in many cities across the US. Signing Time! is produced and distributed by Two Little Hands Productions, which is located in Salt Lake City, Utah. Signing Time's multi-sensory approach encourages learning through three senses — visual, auditory and kinesthetic — and reaches children with diverse learning styles and abilities by encouraging interaction through signing, singing, speaking and dancing. Throughout the series, Coleman, her daughter Leah, Leah's cousin Alex, and Hopkins, an animated frog, teach ASL vocabulary-building signs. The series teaches signs for common words, questions, phrases, movements, colors, sports, days of the week, everyday objects, and common activities.

An educational show on PBS that teaches children ASL, or American Sign Language, through song and repetition.