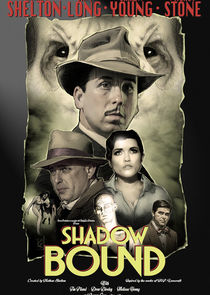 Shadow Bound follows famed pulp horror writer, Jack Pickman, as he returns to his childhood home after the mysterious death of his estranged father. Upon his arrival, Jack discovers his brother has been institutionalized in an asylum. Reeling from this news, Jack begins his investigation and discovers evidence insisting that his father's last case may have been to blame for his untimely death. Jack sets out with his two childhood friends to uncover the truth about the strange happenings in Veritas. Soon they find themselves in a desperate race to save the world from an ancient evil that has emerged from the shadows.

Famed horror writer, Jack Pickman, returns to his childhood home of Veritas and soon finds himself embroiled in a terrifying mystery.