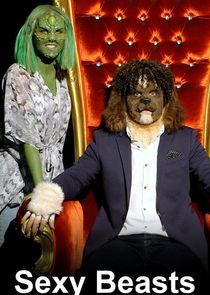 Sexy Beasts is a British reality television Dating game show show produced by Lion Television and aired on BBC Three in February to September 2014. The show features people being transformed with Hollywood Prosthetic makeup into animal and Mythical creatures. The show's format involves one eligible single (Male or Female) and three possible suitors, all four of which have been made over with Prosthetic makeup, each "beast" will then go on a date with the singleton. Over the course of the show, two will be eliminated, at which point their make up is removed and their real identity is revealed for the first time. The remaining person is then chosen as the winner to go on a second date.

A show on a mission to to proving that persona is more crucial than physicality when it comes to the attraction of both sexes. Top-of-the-range hollywood prosthetics are used to disguise ...

Can muscular Welsh lad Conna find a girl who likes him for more than just his looks?