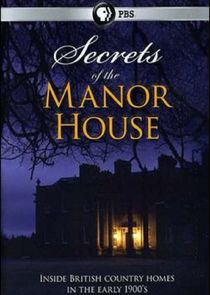 Secrets of the Manor House looks beyond the fiction to the truth of how life was in these ancient British houses, and how mounting financial, political and social pressures were about to bring momentous changes to both the wealthy and their servants.

Step inside the home of the Dukes of Devonshire.

On an estate the size of Washington, DC sits Chatsworth, home to the Dukes of Devonshire, one of the grandest aristocratic dynasties in England. The tales of intrigue, tragedy, and scandal of this great family are inextricably intertwined with those of the house itself, from the decadent life of the shockingly glamorous Duchess Georgiana, to the tumultuous love story between JFK's favorite sister Kathleen Kennedy and heir Billy Cavendish. Peregrine Cavendish, the 12th Duke of Devonshire, shares the history and some of the inner workings of this great house and grounds, one of England's largest private homes, which is "much more of a home than perhaps it looks from the outside... we're very lucky."

1x4: Secrets of Althorp - The Spencers

1x1: Secrets of the Manor House