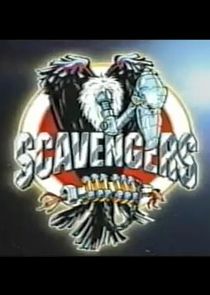 Scavengers was a British game show which aired on the ITV Network from 1994-1995.

The Commander of the shuttle-craft Vulture leads two teams of Scavengers to the stricken cargo ship Cyclops in an attempt to retrieve salvage. Each team of Scavengers is formed from one man and one woman. The Commander and The Scavengers are joined by a female android who provides directions and tactical information to the team once the game has begun.