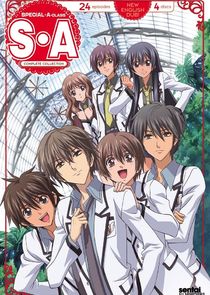 Based on a shoujo manga by Maki Minami serialised in Hana to Yume. When Hikari was little, she and her father liked to watch pro wrestling, and she became very good at it. She was the pride of her family until one day she was introduced to Kei, the son of her father's friend. He instantly defeated her in wrestling, and started what would become Hikari's major ambition to one day beat him. To do this she enrolled in Kei's school, an ultra elite school that costs her father a lot of money. This unusual school created classes according to grades, and the top seven students become members of the "SA". They have their own building, and can optionally attend class. Hikari is usually the only one who does so, since she desperately wants to beat Kei with test scores. The members of the "SA" have been close friends since their first year.

Her whole life, Hikari Hanazono has been consumed with the desire to win against her school rival in S.A class, Kei Takishima at anything. However, Kei's feelings towards Hikari are different.