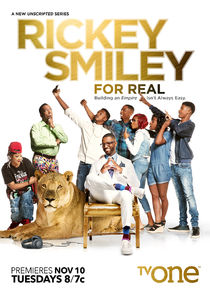 Rickey Smiley for Real is the brand-new unscripted series that takes a humorous look at the hectic life of a nationally-syndicated radio host, stand-up comedian, actor, TV personality and businessman as he tries to juggle his career as with his personal life where he is the single father to five children. Rickey strives to be a mega media mogul but is constantly being torn between his work and family demands, which frequently results in interesting and often funny moments as he constantly plays catch up. A notoriously picky bachelor with a habit of picking the wrong women, or ending relationships for the smallest of reasons, Rickey is a complete mess in the romance department.

Who rounds out Rickey's family?Miss Pat, the live-in assistant who manages Rickey's Birmingham home, Brandon, his oldest son who always has a get rich quick scheme with bad results, Malik a sweet knucklehead who is trying to come into his own, D'Essence an adopted daughter who is taking full advantage of her newfound freedom, Aaryn,who has just started cheerleading and dealing with the attention of boys, Craig, a teenager being raised by Rickey and Miss Pat. Of course more shenanigans ensue with his work family too.