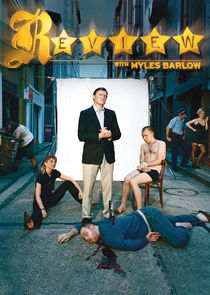 Myles Barlow is a critic who reviews life experiences in response to viewer questions. Barlow reviews real-life experiences such as being a murderer and a drug-mule, the rush of pleasure as he pays for sex and the bleakness of living on the streets.

Regular segments include "Letter of the Week" along with a summary of the show at the beginning and highlights of the next episode which do not actually reflect the actual episode contents.

Myles uses often unnecessarily complex metaphors to conclude each segment, choosing an abstract notion or object and then comparing his experience to it.

Myles Barlow is a critic who dares to review every aspect of life, from having an idiot for a friend to armed robbery - don't do it till Myles reviews it! Every week Myles reviews different...