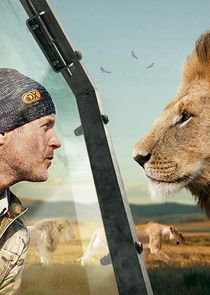 Ever wondered what it's like to come face to face with the planet's most dangerous predators? Brand new to Discovery in November, this series follows former Navy SEAL Joel Lambert and his team of experts as they do just that.

In a bid to analyse their sophisticated hunting behaviour, Lambert travels with a team of researchers from the four corners of the world to study the most powerful predators known to mankind. The project takes the team from the plains of Zambia and the frozen ice floes of Norway, to the treacherous waters off the coast of South Africa.

Using a specially-built, transparent pod made from the strongest jet glass, Lambert and his team spend 24 hours living among the animals. Their state-of-the-art laboratory contains an array of scientific equipment allowing them to come face-to-face with lions, hyenas, polar bears and sharks, to record and measure their fascinating behaviour, senses and skills, as well as Lambert's reaction to being the hunted, rather than the hunter.

In the choppy waters of the South Atlantic just below Cape Town, former US Navy SEAL Joel Lambert takes on the world's most feared ocean predator, the great white shark. Converting the pod for use at sea proves hazardous and difficult. But while the team tries to fix it, Lambert witnesses the most spectacular form of shark hunting on the planet - the breach - when the 2-3 ton great white leaves the water at 40 km/h to take out unsuspecting young seals in False Bay. Joel assesses the impact power of the sharks using an accelerometer, and takes the plunge when he agrees to test the pod in shark-infested waters.

1x5: The Inside Story