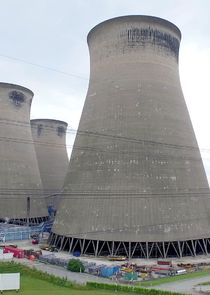 Series following the work that goes into running one of the 'Big Six' energy companies, SSE. This documentary series follows the staff over a year as they keep the countries power flowing.

The Customer Is Always Right

In the final episode, we follow the story of SSE attempting to turn around its reputation - following criticism in parliament, fines for mis-selling and hundreds of thousands of customers leaving the company. 'I'm not sure I'm going to make people love the energy sector,' admits chief executive Alistair Phillips-Davies. 'I'm not like a rock star getting on stage here and hitting the first chord of a great song.'

Alistair entrusts one of his lieutenants, Will Morris, with the job of making us feel differently about SSE. Will commissions an expensive new advert about 'the fun electricity brings to our lives', featuring Maya, a computer-generated orangutan.

Down on the ground, the company's linesmen are getting on with the job of replacing cables and wires, some dating dating back to the 1930s. Linesman Kevin Wade admits he's survived a few electric shocks replacing these cables. But bad weather is on the way - a storm hits and operations manager Bev Keogh must despatch linesmen to repair cables brought down by falling trees. Some customers lose power for hours.

No sooner has the company weathered that storm than the energy sector is in trouble again - this time for not cutting its gas prices fast enough when wholesale costs fall. SSE agrees to cut its gas price, but Alistair Phillips-Davies says the cut will put a £60m dent in the company's income.

We're all using less electricity than we used to - so energy companies like SSE are trying to sell us other products as well. In the company's call centres, they take the opportunity of customers phoning in with a complaint to offer them a broadband deal or phone package. Maya the CGI orangutan is enlisted to help sell the broadband deal in her latest advert.

At the end of the year, Alistair has managed to nudge the company's profits up - as broadband sales increase and customer satisfaction goes up too. But another half-a-million customers have still left the company.

1x3: The Customer Is Always Right

1x2: It's Not Easy Being Green

1x1: Keeping the Lights On