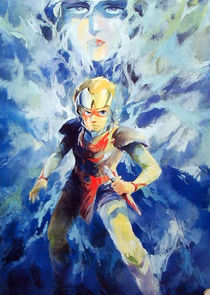 Prince Jorudi with his brother Hai Sharutatto are fighting against their father, Madaru, with his evil world domination ambition using giant robots. However, both Prince Jorudi and his brother's goal might not be the same even though they are both fighting their father, a tryrant. While Prince Jorudi goals is to save the world from his father ambition, Hai Sharutatto plans to take over his father's place and therefore he sees Jorudi and their sister, Chururu as nothing but rivals. Legend tells of a mysterious avenger, known as the Iron Giant will overthrow the tyrant.

A Shaft of Light in the Legend

1x24: Collapse of the Illusion

1x19: Collapse of the White Valley