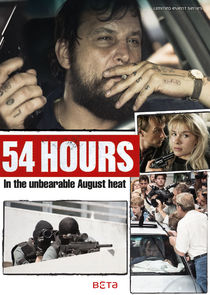 August 16, 1988 - 8:04 am: someone calls in a breaking and entering at the Deutsche Bank subsidiary in Rentford-Nord, Gladbeck. As the police arrive with several patrol cars, what was planned as a simple robbery quickly turns into an armed robbery where hostages are taken. The police's Special Forces are unable to go in and the offer of six months incarceration by the DA does not seem like a valid option for Rösner and Degowski. They decline and after Rösner gives a telephone interview, his voice is identified. Flight is the only thing left to do for the perps. For 54 hours, the whole country holds its breath as the hostage crisis carries on, all the while every second of it is being broadcast via TV and radio as hordes of journalists stand by – crime live.

None of the involved police forces in several states seem to be prepared for a crime of this proportion – a stroke of luck not only for the criminals but also for the journalists who are getting close to them in ways which do not seem appropriate.

Based on the true story that shocked a nation in the summer of 1988 and revealed the scandalizing amount of errors committed by the media and the police in a half-baked attempt to rescue hostages.

The situation escalates as the runaway robbers hijack a bus full of people in Gladbeck city centre. Conclusion of the fact-based crime drama about a hostage crisis that shocked Germany in the summer of 1988.