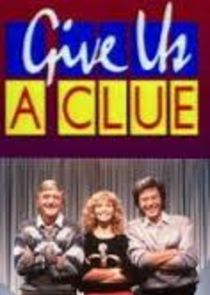 Give Us a Clue is a British televised game show version of charades which was broadcast on ITV from 1979 to 1992. The original host was Michael Aspel from 1979 to 1984, followed by Michael Parkinson from 1984 to 1992. The show featured two teams, one captained by Lionel Blair and the other by Una Stubbs. Later versions of the programme had Liza Goddard as captain of the women's team.

A revived version was attempted by BBC One, which ran from 10 November to 19 December 1997 and commissioned 30 episodes, it was hosted by Tim Clark. Teams were captained by Christopher Blake and Julie Peasgood and the show tried to introduce a lateral thinking puzzle (which the host could "give clues to"). Give us a Clue returned for a special Comic Relief episode on 5 March 2011 with Sara Cox, Christopher Biggins, Lionel Blair, Una Stubbs, Holly Walsh, Jenni Falconer and David Walliams.