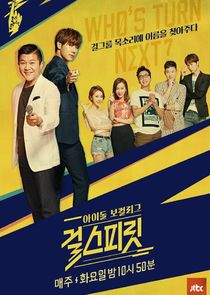 Girl Spirit is a South Korean reality television singing competition that premiered on cable network JTBC on July 19, 2016. The aim of the show is to highlight the talents of the vocalists of twelve lesser-known girl groups that debuted in recent years. The contestants are ranked at the end of every episode based on their performances, and their scores will be accumulated over the course of twelve weeks to determine the top four contestants, two from each team. Each week select contestants' songs will be released digitally. The winner will receive a brand new car and the runner-up will get a family vacation to Saipan; both the winner's and the runner-up's final songs will also be released digitally.