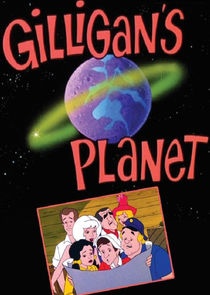 "It's a brand new story about The Castaways! Leaving their tiny island after years and months and days, they built a little spaceship, crude but it could fly. They left their home and lost their way, between the stars and sky, they went from an island to star, lost on Gilligan's Planet." It's true – The Castaways are now lost in space! They're all here, in this strange, new world, Gilligan, the Skipper, the Millionaire, his Wife, the Movie Star, the Professor and Mary Ann. Now joined by Gilligan's alien sidekick Bumper, they begin a whole new life on a whole new world, while still trying to repair the now space-worthy SS Minnow and return home from their infinite three hour tour.

The same passengers that got shipwrecked in the tv series get space-ship-wrecked on distant planet.

1x10: Invaders of the Lost Barque

1x8: Too Many Gilligans