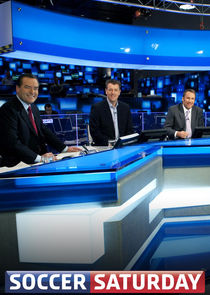 Soccer Saturday is broadcast from 12 pm on Sky Sports News HQ and lasts for up to six hours. The programme begins with the host and four regular in-studio pundits previewing the weekend's matches, reviewing recent results and debating current issues in football.

From 3 pm–5.15pm, Soccer Saturday provides running coverage of the 3 pm league matches, none of which are televised in the UK (and only one of which is televised in Ireland). The graphics display a vidiprinter and cycle through current scores in the English and Scottish leagues, with Jeff Stelling providing commentary on the events as they unfold. Significant events at the most high profile games – almost always in the Premier League – are described by the studio panel who each watch a game on a monitor. Other games deemed important are reported on by correspondents at the grounds connected to the studio by a video link.