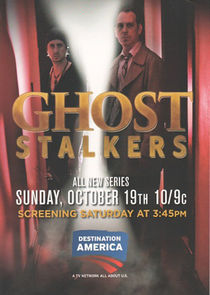 Near-death experiences may be the closest we ever come to knowing what exists on the "other side". Many of those who have seen the proverbial white light say they returned to life with a sudden sensitivity to the spirit world, and it's believed that people who are sensitive enough can glimpse through and even enter places - portals - that bridge our realm with the hereafter. In the all-new series Ghost Stalkers, produced exclusively for Destination America by Ghost Adventures' Nick Groff, two men who crossed over investigate the afterlife that they encountered for a brief, eye-opening moment by exploring American locations that are rumored to house doorways to another dimension.

Investigators of the strange, John E.L. Tenney and Chad Lindberg, explore the world's most allegedly haunted locations in search of the truth regarding the nature of existence and if there are worlds beyond our reality.