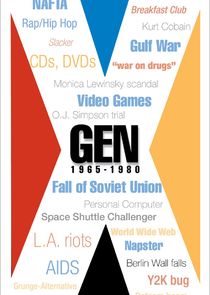 National Geographic Channel recognizes the 65 million people born between 1961 and 1981, flipping the long-held stereotype of a generation of disenfranchised slackers. Narrated by Christian Slater, six hour-long episodes examine how the experiences of post-baby boom youth inspired some of the greatest achievements the world has ever seen, from the historic presidential election of 2008 to the legalization of gay marriage. Lending commentary and personal stories are a host of authors, journalists, politicians and celebrities, among them Kevin Smith, Courtney Love, Sara Palin, Molly Ringwald, Gavin Newsom, Julian Assange, Rachel Dratch, and Tabitha Soren.

How did the generation between Baby Boomers and Millennials become characterized as slackers? Even cynics can change the world. This six-part series re-examines the era on a quest to redefine the so-called Slacker Generation.

The Politics of X

A look at how the political consciousness of Generation X evolved over several decades, especially in terms of race and women's rights.

1x4: The Power of Disruption

1x3: The Geek Shall Inherit the Earth