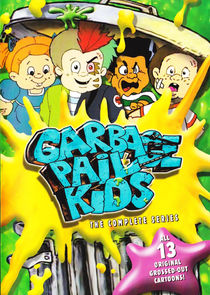 From deep within the historic TV animation vaults comes this nostalgic, hilarious blast from the past: "The Garbage Pail Kids" television series! Based on the wildly popular "Garbage Pail Kids" trading card stickers produced by The Topps Company (and coveted by collectors) in the 1980s, these 13 animated TV episodes produced in 1989 have remained unaired and unseen - until now. Join the adventures of a seemingly normal group of kids who have the ability to quickly "trash out" to their superhero identities to right whatever wrongs come their way. It's a wacky, funny comedy gross-out with all 13 individual episodes of this rare, never-before-seen animated series.

The adventures of a group of really gross kids.