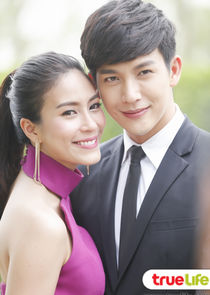 Our heroine is the star number #1 in Thailand, with her pictures and novels every day in newspapers and magazines and dispute with other actresses from the agency. The girl was given the nickname "Sassy Angel" and although she doesn't like this and gets very angry, she doesn't give it much importance. A fortune teller told her that she's in danger and soon she was attacked by a mysterious guy, so this matter forced her to hire a bodyguard. Our hero hates stars because his ex-girlfriend left him to become famous. Material difficulties forced him to become her bodyguard and at the same time pretending to be her boyfriend for her safety. But then there is his ex-girlfriend who is eager to resume the relationship and in addition, without realizing he starts falling in love with the heroine. But many people will prevent this relationship, with envy and greed from the colleagues. Is falling in love with a simple bodyguard possible? And who attacked her?