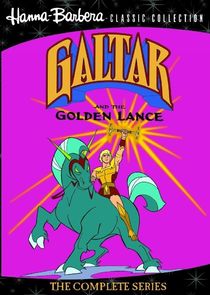 The series is about the mythical adventures of three companions: Galtar, Princess Goleeta, and her younger mind controlling brother, Zorn. Galtar, with the help of his Golden Lance, is fighting with Tormack, the tyrannical usurper of the kingdom of Bandisar who is conquering their entire world. Tormack is responsible for the death of both Galtar's parents and assassinating the rest of Goleeta and Zorn's family. Tormack, among others like him, covets the power of Galtar's supernatural weapon, the Golden Lance, in order to combine it with the stolen ancient and indestructible Sacred Shield, which rightfully belongs to Goleeta and Zorn. For whoever holds both cannot be brought down in any form of combat. Also aiding Galtar and his friends is the powerful red dragon known as Ravens Claw. Further hindrances (plus comic relief) to this trio comes from inept father and son mercenaries Rak & Tuk.