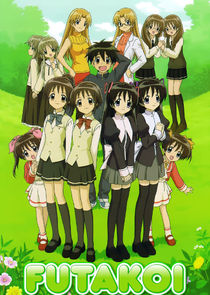 Have you ever gone out with twin sisters? Or both at the same time? People say that such thing would never happen, but it really exists, in this romantic animation. Cute twins, and twice the love... 9th grader Nozomu Futami moves back to a town where he lived during his childhood alone by himself lodging at Sourinji, a temple owned by his relative, because of is father's work. He walked pass by a place he used to play when he was little and remembers about Ichijo sisters who were twins telling to him, "We both like you Nozomu, choose one of us when you become 15". It's certainly a child play and those two wouldn't remember about it, too. "Without a doubt, that was when I was the most popular in my life. Would both of them still live in this town? Would I ever bump into them? Have they become pretty?" Nozomu imagines. When Nozomu was walking the town deeply emotional, he accidental

1x9: Pastels for a Sunset

1x7: A Jewel Case in Midsummer

1x5: When Time Started to Move