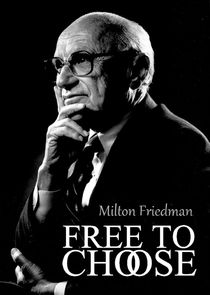 Free to Choose was an award winning PBS television series featuring Nobel Prize-winning economist Milton Friedman. Ten films make up the series, each featuring a short documentary where Milton Friedman presents his views on a given topic followed by a discussion and debate with various participants including politicians, academics, business people, et al.

This was originally a book, made into a ten part television series broadcast on PBS by economists Milton and Rose Friedman that advocates free market principles. The thrust of the series is...

2x4: The Failure of Socialism

2x2: The Tyranny of Control

2x1: The Power of the Market

1x9: How to Cure Inflation

1x8: Who Protects the Worker?

1x7: Who Protects the Consumer?