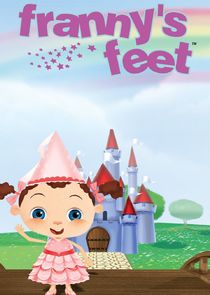 Franny's Feet is an animated series for children, produced by DHX Media in Ontario, Canada. The show follows the adventures of 6-year-old Frances "Franny" Fantootsie (a portmanteau of "fantasy" and "tootsie", a slang word for "foot") as she tries on various pairs of shoes and travels to different places in the world. The show first appeared on CBC Television on January 1, 2004, went on Family the following September and was introduced to PBS Kids in selected markets beginning in summer 2006. Discovery Kids UK & Five & Playhouse Disney UK A fourth season began September, 2009.

Franny's Feet is about a 5 year old girl who visits her Grandfather's shoe repair shop and tries on a pair of shoes. The shoes take her on an adventure related to the shoes (for example, if...

4x12: Sweet Talk/Lights in the Night

4x8: On Your Toes/It Figures