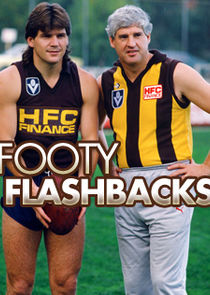 Channel Seven's Sandy Roberts will be taking footy fans down memory lane with Footy Flashbacks on Sundays at 2pm. The one-hour show will take a look back at some of the most memorable and dramatic AFL matches in living memory, including the 1989 Grand Final Hawthorn vs Geelong and 1979 Grand Final Carlton vs Collingwood.

The show will feature either one or both sides playing later that day on Seven's AFL Sunday match.