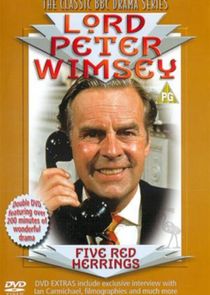 Hailed by critics as the finest mystery series ever filmed, this original BBC adaptation of the Dorothy L. Sayers novel stars Ian Carmichael as aristocratic detective Lord Peter Wimsey. Wimsey goes on holiday in Scotland, hoping to relax and catch some trout, but he is soon called on to catch more than fish when Campbell, an unpopular local artist, is found dead. Campbell appears to have taken an accidental fall, but his hot-tempered behavior and ongoing feuds with several local men suggest murder. Wimsey feels certain of this when a key piece of evidence is missing from the seaside spot where Campbell was found. With six possible suspects, Wimsey must use his skills to determine the five red herrings and expose the murderer. In the dramatic conclusion, Wimsey reenacts the crime, casting himself as the murderer and Bunter as the victim.

Solve the mystery with Lord Peter Whimsey, based on the book by Dorothy L Sayers.