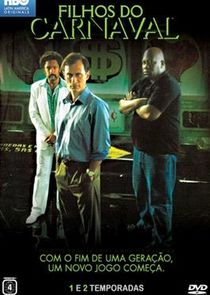 Sons of Carnival tells the story of Anésio Gebara - the owner of a Samba School and Banker of an illegal lottery called "Animal Lottery" - and his 4 sons: Anesinho (white, 43 years old), Claudinho (businessman, white, 33 years old), Brown (Drum Major, mulatto, 33 years old) and Nilo (his father's bodyguard, black, 33 years old).The series begins on the day of the "Godfather's" birthday. Upon completing 75 years of age, Anésio Gebara is hit with the worst news in his life: Anesinho, his dearest son, commits suicide by shooting himself in the heart.From this moment on, Sons of Carnival relates the trajectory of the 3 remaining sons to fill the space left by the favorite son; the encounters and dis-encounters of the three "bastard" offspring until each one finds his place in the world. A saga which only ends in the last few seconds of the spectacular Samba School parade in Rio de Janeiro.

Sons of the Carnival tells the story of Anésio Gebara, leader of a wide network of "Animal Lottery," and his four sons, who take different paths to occupy a significant place in their father's life.